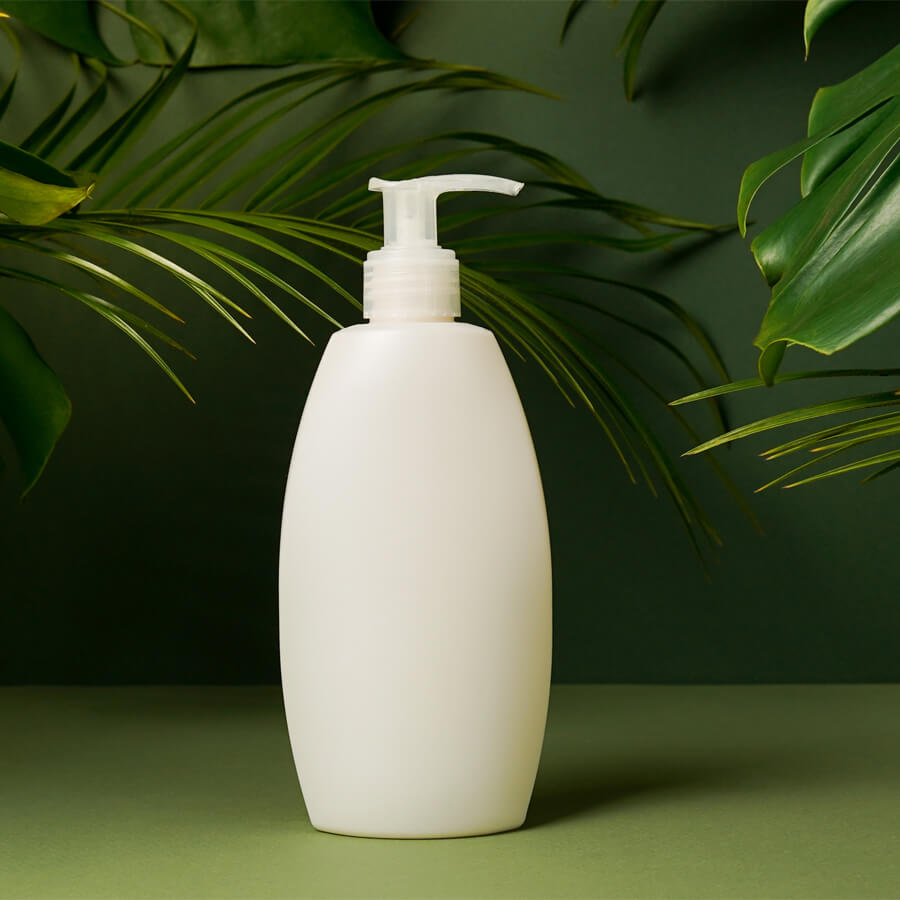 Home » Beauty » 10 ideas for your photoshoot

10 ideas for your photoshoot

Want to do a photo shoot and don’t know where to start? Feel like you won’t be able to give your photos any personality? The good news is that you don’t necessarily need to be great photographer in terms of technology. The most important thing is to start with a good idea. Read on for some original ideas for your photoshoots. Once you have your idea, you can then decide whether to do it yourself or rely on a professional.

Nature covers a wide range of things, and a large proportion of people are interested in it. First and foremost, nature-themed photography communicates a respect for the planet. Secondly, it solves two technical problems of photography – background and lighting. If you do your photoshoot in a park or by a lake, you get a great, free background and plenty of natural lighting. Plan your day by checking the weather forecast and then choose somewhere to take your photos that has a variety of trees and flowers, like a botanical garden. Your images will take on all the beauty of your chosen location and this will contribute wonderfully to the personality of your photoshoot. If you have a photography studio available, consider bringing some natural elements in as in this example with bamboo or in this other one from the same brand that is brought to life by its beautiful flowers.

Think about what you’re taking pictures of and what kind of background it fits into. Then, do the exact opposite. This will create a disruptive effect that draws attention to the thing being photographed. For example, instead of photographing furniture in a house, do it on a beach. Instead of portraying models in elegant dresses at a party, photograph them in a marble quarry or in the parking lot. And if you’re taking shots of a young rock band, you might do so at an ancient villa.

Choose a location with a strong personality and set all your images in similar (but never the same) places. For example, for a family or wedding album, you might take pictures of everyone in the various corners of an old town. For a fashion photoshoot, you might instead go for a more modern location like Porta Nuova in Milan.

Posts with animals get the most clicks on social media, so why wouldn’t they also work for your photoshoot? Think about what animals you have available to include, and try to match them to the people that’ll also be in the shots. You could also use just one animal, for example a dog, and have each person relate to it differently. To give your photos a unique touch, you might go for an exotic animal, such as a colorful parrot or a chameleon. One extreme example of this is the photography of Olga Barantseva. 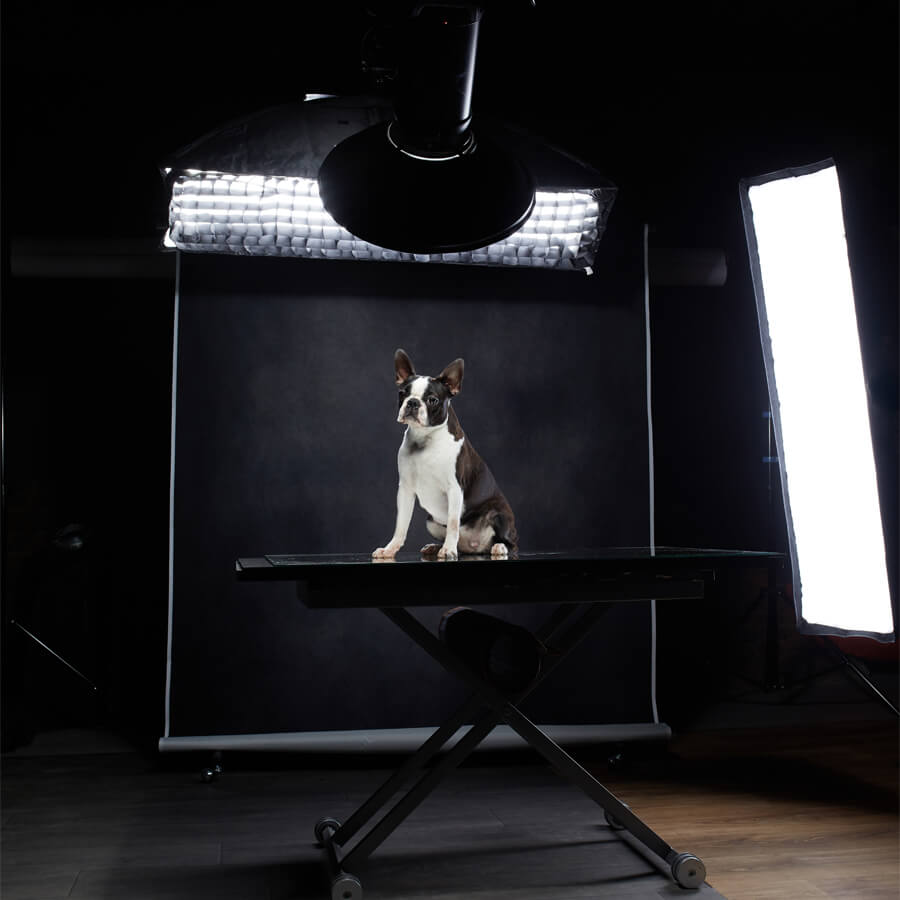 We’re used to living in a world of color, and so your photos will be more distinct if made in black and white, a style that can create a unique atmosphere. This style is ideal especially for emphasizing facial expressions and the light of the eyes, as well as for making distinctive pictures of very young people. 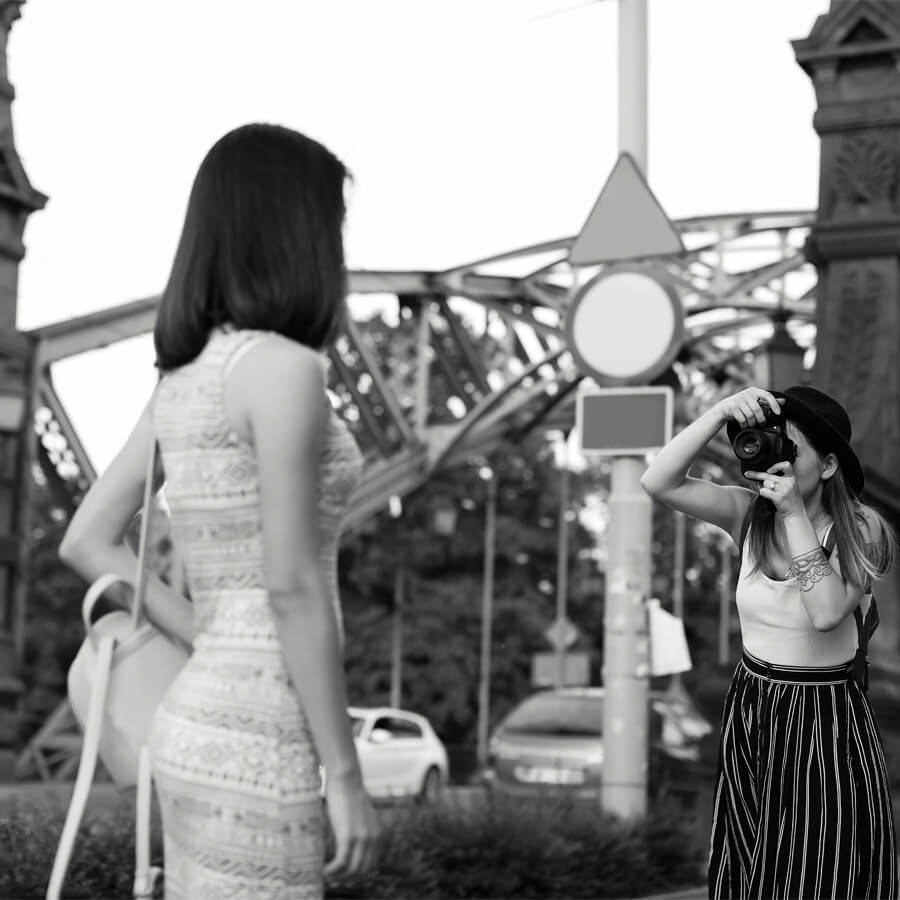 If you’re working with non-professional models, you may have some problems finding the right pose for them. To give the photos a natural feel in spite of this, you can have them hold signs. Your models will be more at ease in their poses and you’ll be able to put a message into your photos, whether it’s about world peace or your product.

Another way to help models get a unique pose is to make use of frames. You could use just one and have each hold it in a different way, or a different one for each person. The type of frame will convey the personality you want – baroque, linear, modern or ancient. This is also a great way to make smaller products more prominent against a relatively uniform background. For example, cosmetics packaging on a green background with lots of plants.

We all have private and public modes of transport available to us, and you can use them for your photoshoot. Imagine a collection of evening dresses as they flutter from a scooter. Bottles of organic wine being delivered in a bike basket. If the photography is for a family, you can set up each person with their own vehicle, for example the father on a bicycle and his child in their pedal car.

Balenciaga’s choice to make models do their work on snow sparked much debate, and so we’re not proposing you do something like that. Rather, you could give some life to your photoshoot by making fake snow out of paper or confetti at home. By capturing the ‘snow’ falling, you’ll get a more vivid image with a sense of natural movement.

This idea works for photos of small products like cosmetics. Place the bottle or jar on a surface and place an open picture book behind the product. Choose what images to include carefully – this works best without too much going on in the background, some good examples being a desert, deep space, or the open sea. Avoid showing anything outside the picture and it will seem as if the products are actually in the location depicted.
Now try to come up with 5 more ideas and find one that suits you. Then, you can decide whether to make the photos yourself or rely on a professional for results like this.

How to prepare for a photoshoot

How to take product photos for catalogs?